Waking Writer has posted on its website an interview of me conducted a month ago. Click https://wakingwriter.com/2016/10/26/harold-titus-author-of-crossing-the-river/.
Harold Titus ﻿
Posted by Harold Titus at 11:26 AM No comments:

Email ThisBlogThis!Share to TwitterShare to FacebookShare to Pinterest
Labels: Interviews of Harold Titus

Frederick Douglass -- Betrayal
In my last posted episode, Frederick and several of his friends had planned to escape their bondage by stealing a canoe from one of their masters, a Mr. William Hambleton, and paddle up the Chesapeake Bay and a canal to the Delaware River to reach the free state of Pennsylvania. This was to occur on the Saturday before Easter.


According to plan, went to work as usual that Saturday morning.  While spreading manure, he felt a “sudden presentiment, which flashed upon me like lightning in a dark night.”  Turning instantly to Sandy Jenkins, working next to him, he said, “Sandy, we are betrayed.”  replied, “Man, dat is strange; but I feel just as you do.”  said no more.  When the horn sounded for breakfast—which, in his anxiety, he could not even think about—he started for the house.  As he came near to it, he looked down the long lane to the gate and saw four white men on horseback, leading two black men, lashed.  Charles Roberts and Henry Bailey had been dragged over from the Hambleton farm, down the St. Michael’s road.  Seeing them, knew that it was “all over…. We are surely betrayed.”  William Hambleton, who seldom moved his horse above a walk, galloped up the lane, rolling dust behind him.  Reining his horse—and his anger—he asked, with his usual circumspection, where Freeland was.  directed him to the barn (McFeely 53).


Mr. Hambleton, without dismounting, rode up to the barn with extraordinary speed.  In a few moments, he and Mr. Freeland returned to the house.  By this time, the three constables rode up, and in great haste dismounted, tied their horses, and met Master William and Mr. Hambleton returning from the barn; and after talking awhile, they all walked up to the kitchen door.  There was no one in the kitchen but myself and John.  Henry and Sandy were up at the barn.  Mr. Freeland put his head in at the door, and called me by name, saying, there were some gentlemen at the door who wished to see me.  I stepped to the door, and inquired what they wanted.  They at once seized me, and, without giving me any satisfaction, tied me—lashing my hands closely together. …


In a few moments, they succeeded in typing John.  They then turned to Henry, who had by this time returned, and commanded him to cross his hands.  “I won’t!” said Henry, in a firm tone.  … “Won’t you?” said Tom Graham, the constable.  “No, I won’t!” said Henry, in a still stronger tone.  With this, two of the constables pulled out their shining pistols, and swore, by their Creator, that they would make him cross his hands or kill him.  Each cocked his pistol, and, with fingers on the trigger, walked up to Henry, saying, at the same time, if he did not cross his hands, they would blow his damned heart out.  “Shoot me, shoot me!” said Henry; “you can’t kill me but once.  Shoot, shoot,--and be damned!  I won’t be tied!” This he said in a tone of loud defiance; and at the same time, with a motion as quick as lightning, he with one single stroke dashed the pistols from the hand of each constable.  As he did this, all hands fell upon him, and, after beating him some time, they finally overpowered him, and got him tied.


During the scuffle, I managed, I know not how, to get my pass out, and, without being discovered, put it into the fire.  We were all now tied; and just as we were to leave for jail, Betsy Freeland, mother of William Freeland, came to the door with her hands full of biscuits, and divided them between Henry and John.  She then delivered herself of a speech, to the following effect:--addressing herself to me, she said, “You devil!  You yellow devil!  It was you that put it into the heads of Henry and John to run away.  But for you, you long-legged mulatto devil! Henry nor John would never have thought of such a thing.”  I made no reply, and was immediately hurried off towards St. Michael’s.  Just a moment previous to the scuffle with Henry, Mr. Hambleton suggested the propriety of making a search for the protections which he had understood had written for himself and the rest.  But, just at the moment he was about carrying his proposal into effect, his aid was needed in helping to tie Henry; and the excitement attending the scuffle caused them either to forget, or to deem it unsafe, under the circumstances, to search.  …


When we got about half way to St. Michael’s while the constables having us in charge were looking ahead, Henry inquired of me what he should do with his pass.  I told him to eat it with his biscuit, and own nothing: and we passed the word around, “Own nothing,”  and “Own nothing!” said we all.  Our confidence in each other was unshaken (Douglass 95-97).

Frederick Douglass -- Escape Plan
’s close companions “began to see that they too must seek a way out of bondage.  They started using the dangerous word ‘escape.’ There were many arguments about the wisdom of trying to run away, to escape, particularly when they began talking with others about it” (McFeely 51).
At times we were almost disposed to give up, and try to content ourselves with our wretched lot; at others, we were firm and unbending in our determination to go.  Whenever we suggested any plan, there was shrinking—the odds were fearful.  Our path was beset with the greatest obstacles.  … We knew nothing about .  Our knowledge of the north did not extend farther than New York; and to go there, and be forever harassed with the frightful liability of being returned to slavery—with the certainty of being treated tenfold worse than before—the thought was truly a horrible one … [W]hen we permitted ourselves to survey the road [to freedom], we were frequently appalled.  Upon either side we saw grim death, assuming the most horrid shapes.  Now it was starvation, causing us to eat our own flesh; --now we were contending with the waves, and were drowned;--now we were overtaken, and torn to pieces by the fangs of the terrible bloodhound.  We were stung by scorpions, chased by wild beasts, bitten by snakes, and finally, after having nearly reached the desired spot,--after swimming rivers, encountering wild beasts, sleeping in the woods, suffering hunger and nakedness,--we were overtaken by our pursuers, and, in our resistance, we were shot dead upon the spot (Douglass 92-93)!
did know much more than his fellow conspirators about how to proceed.   He knew that they had to go northward on the ; he had noticed in that boats went up the bay and, he had learned, through a canal that crossed to the .  Up the Delaware River was , where there was no slavery.  To the east of the and the Delaware River were and the state of , slave-holding states that they had to avoid.  Using ’s knowledge, they agreed on a plan of escape.
They would travel most of the way, seventy or eighty miles, by water.  None of them knew how to sail, so they decided they would steal William Hambleton’s large oyster-gathering canoe the night previous to Easter Sunday and row their way northward close to the Eastern Shore’s many-fingered coast, always within swimming distance should their canoe capsize.
We were less liable to be suspected as runaways; we hoped to be regarded as fishermen; whereas, if we should take the land route, we should be subjected to interruptions of almost every kind.  Any one having a white face, and being so disposed, could stop us, and subject us to examination.
The week before our intended start, I wrote several protections, one for each of us.  As well as I can remember, they were in the following words, to wit:--
“This is to certify that I, the undersigned, have given the bearer, my servant, full liberty to go to , and spend the Easter holidays.  Written with mine own hand, &c., 1836.
William Hambleton,
Near St. Michael’s, in ”
We were not going to ; but, in going up the bay, we went toward , and these protections were only intended to protect us while on the bay (Douglass 93-94).
Near the town of Point, which understood was on the canal that linked Chesapeake Bay to the Delaware River, they planned to abandon the canoe and by foot, unseen, reach .
Unlike the others, Sandy Jenkins was influenced by superstition.  One morning he told , “I dreamed, last night, that I was roused from sleep, by strange noises, like the voices of a swarm of angry birds that caused a roar as they passed.   … I saw you, Frederick, in the claws of a huge bird, surrounded by a large number of birds, of all colors and sizes.  These were all picking at you, while you, with your arms, seemed to be trying to protect your eyes.”  told to take his dream as a warning.
dropped out of the conspiracy (it is not clear if he ever intended to leave his wife and accompany the others), but Frederick and his companions would not be dissuaded.  On Friday, April 1, 1836, their food and clothes bundled tightly, the band slept what they deeply hoped would be their last night in bondage (McFeely 52).
Works cited:
Douglass, .  Narrative of the Life of Frederick Douglass.  New York, Penguin Books USA inc., 1968.  Print.
McFeely, William S.  Frederick Douglass.  , W. W. Norton & Company, 1991.  Print.
﻿
Posted by Harold Titus at 1:01 PM No comments: 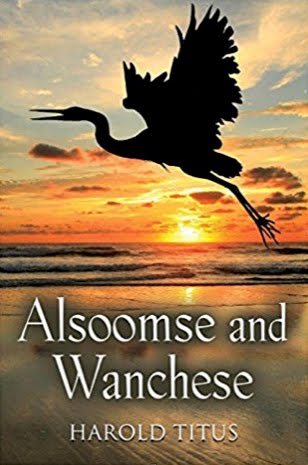